The Canadian Nuclear Safety Commission (CNSC) regulates the use of nuclear energy and materials to protect the health, safety and security of Canadians and the environment. One of the ways the CNSC ensures health and safety is through setting regulations, including dose limits for workers and members of the public. To help set these limits, the CNSC joins the international community in relying on a radiation protection risk model known as the Linear-Non-Threshold (LNT) model.

The LNT model assumes a direct and proportional relationship between radiation exposure and cancer risk with all radiation doses. It provides an understanding of radiation health risks that informs the setting of dose limits and regulations that limit exposure to an acceptable level. Radiation doses at or below these limits are considered safe in that there is no direct medical or scientific evidence to show that they cause harm.

The risks from radiation have been largely derived from atomic bomb survivor studies, where the incidence of disease (principally cancer) was plotted against radiation dose. Where there was data, the dose response was linear, meaning that as dose increased so did cancer risk. However, below the lowest data point, the natural incidence of the disease masked any effects that may have been caused by radiation. Because of this, the LNT model assumes that cancer incidence as it relates to radiation dose behaves in the same way as at higher doses; that is, in a linear manner.

Reports by the International Commission on Radiological Protection (ICRP 99, 2006) and the U.S. National Research Council of the National Academies (BEIR VII, 2006) state that while evidence supports other models, the LNT model provides the best overall fit for radiation protection purposes.

"Baseline cancer rates" refer to the number of naturally occurring cancers expected in a given population. "Excess cancers" refers to any increase in cancer rates.

Despite widespread acceptance of the LNT model for radiation protection purposes, several alternate theories have been proposed to explain the relationship between radiation exposure and cancer risk. Scientists have proposed these alternate theories based on models of cellular and sub-cellular responses to radiation at very low doses to address findings of studies that do not follow the LNT model. Figure 1 illustrates different radiation risk models that estimate the risk of cancer below the lowest dose where excess cancers have been observed (~ 100 mSv). The black data points at 100 mSv and above are taken from epidemiological studies (including studies on radon in homes, nuclear energy workers, medical exposures and the atomic bomb survivors). 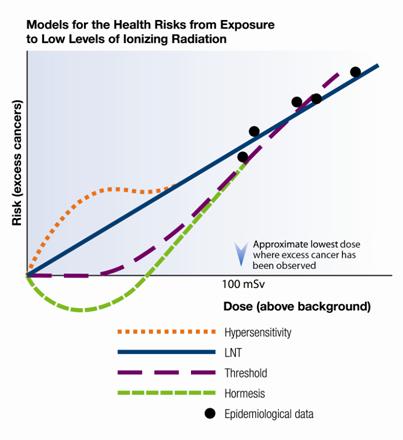 The adoption of the LNT model led to the development of the ALARA (as low as reasonably achievable) principle, which is a fundamental aspect of the CNSC's approach to radiation protection.

The CNSC applies the LNT model in its approach to radiation protection, as a prudent way to protect Canadians from radiation, keeping pace with its international peers.

Regulatory radiation dose limits for workers at nuclear facilities and members of the general public are set to restrict exposures to acceptable levels. The CNSC also requires all licensees to keep radiation levels as low as reasonably achievable (ALARA), economic and social factors being taken into account.

The regulatory dose limit for a member of the public in Canada is 1 millisievert (mSv) per year, while the dose limit for a nuclear energy worker is 50 mSv per year and 100 mSv over a five-year period. These limits are based on international standards that have been derived from the best scientific knowledge available.

Canada's nuclear facilities have a strong track record of keeping radiation doses far below the limits set by the regulations. Figure 2 shows that maximum annual radiation doses to members of the public living near nuclear power plants were under one percent of the 1 mSv limit.

Figure 2: Public doses around Canadian nuclear power plants as a percentage of the annual public dose limit of 1 mSv 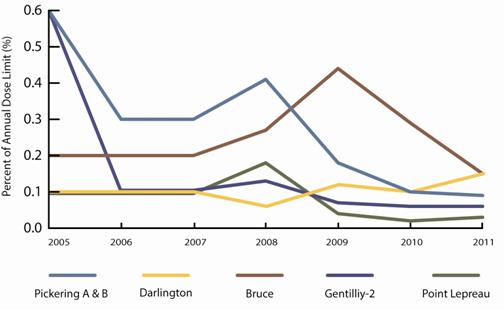