Q1.  BWXT Nuclear Energy Canada Inc. (BWXT) has applied to the CNSC to renew its operating licence. Who makes the decision to license a nuclear facility?

Q2. What is the difference between CNSC staff and the Commission?

Q3.  I have read in newspapers that the CNSC has already recommended the approval of BWXT’s application. Is that true?

Q1. BWXT Nuclear Energy Canada Inc. (BWXT) has applied to the CNSC to renew its operating licence. Who makes the decision to license a nuclear facility?

A1.  The Commission makes the decision whether to licens e a nuclear facility. The Commission is an independent administrative tribunal that works at arm's length from government without any ties to the nuclear industry. The Commission does not support, endorse or recommend any nuclear project, activity or prescribed technology in Canada.

In March 2020, the Commission will hold a public hearing, which will give involved parties and members of the public an opportunity to be heard. If you would like to comment on BWXT’s application, you may file a request to intervene by January 27, 2020. The Commission will consider all submissions, after which it will deliberate and render a decision on BWXT’s application. The Commission will only issue a licence if it is satisfied that the proposed nuclear facility or activity would pose no danger to the health, safety and security of persons and the environment.

Q2. What is the difference between CNSC staff and the Commission?

A2. The CNSC is divided in two separate groups: the Commission and CNSC staff.

Together, the Commission and staff form the CNSC and share a common mission to regulate the use of nuclear energy and materials to protect health, safety, security and the environment. 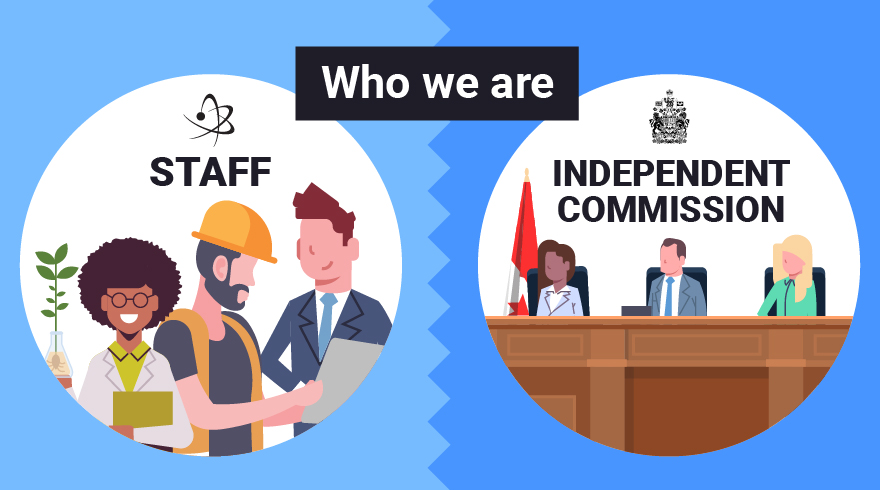 Q3. I have read in newspapers that the CNSC has already recommended the approval of BWXT’s application. Is that true?

A3.  The CNSC has released a report in which staff recommend the approval of uranium pelleting at the company’s Peterborough and Toronto facilities. In December 2019, expert CNSC staff submitted a Commission member document (CMD) to the Commission. This CMD contained an assessment of BWXT’s licence application. As part of this assessment, CNSC staff conducted a review to determine whether BWXT, in completing the proposed activities, would continue to make adequate provisions to protect the environment and the health and safety of persons, maintain national security and take the actions needed to fulfill the international obligations to which Canada has agreed.

Based on their conclusions, CNSC staff recommended that the Commission issue a 10-year nuclear fuel facility licence to BWXT, with proposed licence conditions, and that the Commission authorize the conduct of pelleting operations and the delegation of authority, as set out in the CMD.

This CMD will inform the Commission during its deliberations. However, it will be solely up to the Commission itself to decide whether to issue the licence during the public hearing that will be held in March.

All documentation submitted for the hearing is available on the CNSC website.

You can also email the CNSC public inquiries account at cnsc.info.ccsn@cnsc-ccsn.gc.ca.