Types and sources of radiation

Radiation occurs when energy is emitted by a source, then travels through a medium, such as air, until it is absorbed by matter. Radiation can be described as being one of two basic types: non ionizing and ionizing.

People use and are exposed to non-ionizing radiation sources every day. This form of radiation does not carry enough energy to ionize atoms or molecules.

Some types of radiation have enough energy that they can knock electrons out of their orbits around atoms, upsetting the electron/proton balance and giving the atom a positive charge. Electrically charged molecules and atoms are called ions. The radiation that can produce ions is called ionizing radiation.

There are many types of ionizing radiation. The following are some of the relevant ones:

Alpha radiation:
Alpha radiation consists of two protons and two neutrons; since they have no electrons, they carry a positive charge. Due to their size and charge, alpha particles are barely able to penetrate skin and can be stopped completely by a sheet of paper.
Beta radiation:
Beta radiation consists of fast-moving electrons ejected from the nucleus of an atom. Beta radiation has a negative charge and is about 1/7000th the size of an alpha particle, so it is more penetrating. However, it can still be stopped by a small amount of shielding, such as a sheet of plastic.
Gamma radiation:
Gamma radiation is a very penetrating type of radiation. It is usually emitted immediately after the ejection of an alpha or beta particle from the nucleus of an atom. Because it has no mass or charge, it can pass through the human body, but it is absorbed by denser materials, such as concrete or lead.
X-rays:
X-rays are a form of radiation similar to gamma radiation, but they are produced mainly by artificial means rather than from radioactive substances.
Neutron radiation:
Neutron radiation occurs when neutrons are ejected from the nucleus by nuclear fission and other processes. The nuclear chain reaction is an example of nuclear fission, where a neutron being ejected from one fissioned atom causes another atom to fission, ejecting more neutrons. Unlike other radiations, neutron radiation is absorbed by materials with lots of hydrogen atoms, like paraffin wax and plastics.

People are constantly exposed to small amounts of ionizing radiation from the environment as they carry out their normal daily activities; this is known as background radiation. We are also exposed through some medical treatments and through activities involving radioactive material.

Radiation has always been present and is all around us. Life has evolved in a world containing significant levels of ionizing radiation. Our bodies are adapted to it. 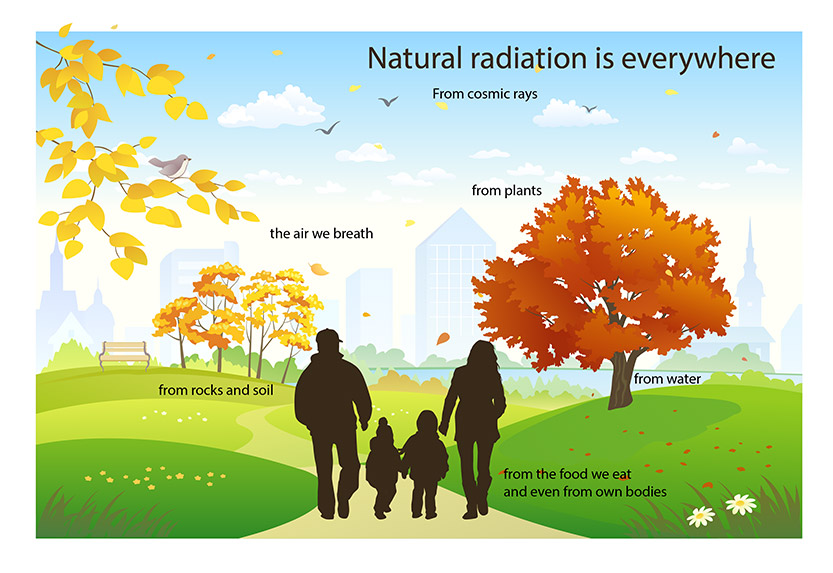 The earth's outer atmosphere is continually bombarded by cosmic radiation. Usually, cosmic radiation consists of fast moving particles that exist in space and originate from a variety of sources, including the sun and other celestial events in the universe. Cosmic rays are mostly protons, but can be other particles or wave energy. Some ionizing radiation penetrates the earth's atmosphere and becomes absorbed by humans, which results in natural radiation exposure.

The composition of the earth's crust is a major source of natural radiation. The main contributors are natural deposits of uranium, potassium and thorium which, in the process of natural decay, release small amounts of ionizing radiation. Uranium and thorium are “ubiquitous”, meaning they are found essentially everywhere. Traces of these minerals are also found in building materials, so exposure to natural radiation can occur indoors as well as outdoors.

Most of the variation in exposure to natural radiation results from inhalation of radioactive gases that are produced by radioactive minerals found in soil and bedrock. Radon is an odourless and colourless radioactive gas that is produced by the decay of uranium-238. It is an inert gas, meaning that it does not react with surrounding matter. Because radon does not react, it can readily move up through the ground and into the atmosphere.. Thoron is a radioactive gas produced by thorium. Radon and thoron levels vary considerably by location depending on the composition of soil and bedrock. Once released into the air, these gases normally dilute to harmless levels in the atmosphere, but sometimes they become trapped and accumulate inside buildings where they are inhaled by occupants. Radon gas poses a health risk not only to uranium miners but also to homeowners if it is left to accumulate in the home. On average, it is the largest source of natural radiation exposure. More information about radon gas and the means to control it can be found on Health Canada's website.

Trace amounts of radioactive minerals are naturally found in the contents of food and drinking water. For instance, vegetables are typically cultivated in soil and ground water which contains radioactive minerals. Once ingested, these minerals result in internal exposure to natural radiation.

The human body also contains several radioactive isotopes. The table below contains a list of some of the isotopes naturally found in the body.

The atmospheric testing of atomic weapons from the end of the Second World War until as late as 1980 released radioactive material, called fallout, into the air. As the fallout settled to the ground, it was incorporated into the environment. Much of the fallout had short half-lives and no longer exists, but some continues to decay to this day. People and the environment receive smaller and smaller doses from the fallout every year.

Radiation has many uses in medicine. The most well known use is in X-ray machines, which use radiation to find broken bones and diagnose disease. X-ray machines are regulated by Health Canada and provincial authorities. Another example is nuclear medicine, which uses radioactive isotopes to diagnose and treat diseases such as cancer. These applications of nuclear medicine, as well as the related equipment, are regulated by the CNSC. The CNSC also licenses those reactors and particle accelerators that produce isotopes destined for medical and industrial applications.

Radiation has a variety of industrial uses that ranges from nuclear gauges used to build roads to density gauges that measure the flow of material through pipes in factories. It is also used in smoke detectors and some glow-in-the dark exit signs, and to estimate reserves in oil fields. Radiation is also used for sterilization in which large, heavily shielded irradiators are used. All of these uses are licensed by the CNSC.

Nuclear power plants (NPPs) use uranium to drive a chain reaction that produces steam, which in turn drives turbines to produce electricity. As part of their normal activities, NPPs release regulated levels of radioactive material which can expose people to low doses of radiation. Similarly, uranium mines, fuel fabrication plants and radioactive waste facilities release some radioactivity that contributes to the dose of the public.

Normally, there is little we can do to change or reduce ionizing radiation that comes from natural sources like the sun, soil or rocks. This kind of exposure, while never entirely free of risk, is generally quite low. However in some cases, natural sources of radioactivity, such as radon gas in the home, may be unacceptably high and need to be reduced.

The ionizing radiation that comes from artificial sources and activities is controlled more carefully. In these settings, a balance is struck between the benefits that the radiation provides to society and the risks it imposes on people and the environment. Dose limits are set in order to restrict radiation exposures to both workers and members of the public. In addition, licensees are required to keep all radiation doses as low as reasonably achievable (ALARA), social and economic factors being taken into account. Also, there has to be a net benefit to the use of radiation. For example, radioactive isotopes are permitted in smoke detectors, because smoke detectors save lives.