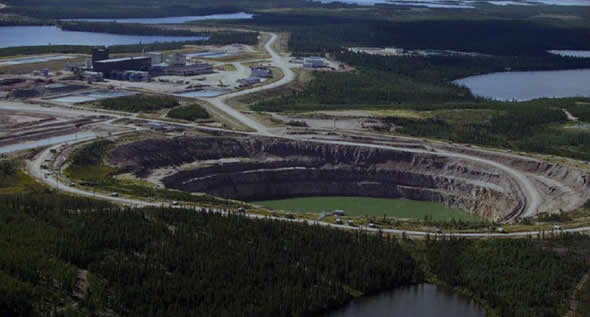 On October 24, 2012, the Canadian Nuclear Safety Commission (CNSC) will hold a one-day public hearing to evaluate the request for changes to a current operating licence. AREVA Resources Canada Inc. (AREVA) is requesting amendments to its McClean Lake operating licence, which would authorize: the operation of the ore slurry receiving circuit and high grade ore processing circuits at its JEB Mill; an increase in the annual uranium concentrate production rate; and the receipt and processing of uranium ore slurry from the McArthur River Mine.

AREVA operates a uranium mining and milling facility at McClean Lake in northern Saskatchewan. Its JEB Mill was designed to process high-grade ore from the Cigar Lake Mine, as well as lower-grade ores mined from the McClean Lake area. The mill was temporarily shut down in July 2010, due to a shortage of ore, and is expected to resume full operation in the fall of 2013, when the Cigar Lake Mine would begin transporting uranium ore slurry to the mill. The amended licence would allow AREVA to receive and process high-grade ore through its milling processes at McClean Lake and increase its maximum annual uranium concentrate production from 8 million pounds to 13 million pounds or 3.6 million kilograms to 5.9 million kilograms.

CNSC staff have verified that the proposed amendments meet the requirements of the Nuclear Safety and Control Act, the Uranium Mines and Mills Regulations, and other applicable legislation. A screening level environmental assessment (EA) was carried out to consider the effects that the processing of McArthur River ore at McClean Lake would have on the environment. The EA’s conclusion that the processing of McArthur River ore is not likely to cause significant adverse environmental effects given existing controls and ongoing mitigation measures was accepted by the Commission in April 2012. Processing of high grade ore and the increased production rate had already been considered and accepted in previous EAs.

Based on the information received and reviewed on the previously approved EAs and the requested licence amendment, CNSC staff’s opinion is that these proposed activities are well within the bounds and intent of the original design of the McClean Lake operation, and will not cause adverse impacts to any potential or established Aboriginal or treaty rights. Nonetheless, the First Nation and Métis communities and organizations identified as stakeholders have been encouraged to participate in the public hearing to advise the Commission directly of any concerns they may have about this licence amendment.

The CNSC has implemented a process to reform licences to improve the clarity and consistency of regulatory requirements and to streamline the administrative process, while maintaining strict regulatory oversight. Licence reform has already been introduced for nuclear power plants and fuel fabrication and conversion facilities. The CNSC will take the opportunity provided by AREVA’s amendment request to implement a new licence format and conditions. This measure supports the CNSC’s ongoing effort to streamline and modernize its existing regulatory framework, while ensuring that there is a clear understanding for each requirement specified in the licence issued by the Commission. CNSC staff have prepared a licence conditions handbook, which consolidates into a single document the criteria that will be used to verify compliance with the licence, as well as interpretations and administrative control of licence conditions. An updated licence will strengthen the regulatory oversight of the McClean Lake operation, while increasing regulatory effectiveness and efficiency, by focusing on risk-significant issues and by reducing administrative efforts that have no impact on nuclear safety.

CNSC staff’s recommendation to the Commission

CNSC staff have concluded that AREVA is qualified to carry on the activities authorized by the amended licence, while maintaining safety, security and the protection of the environment, and has recommended that the Commission approve the licence amendment. If the licence amendment is approved, the CNSC would continue to inspect and review the licensee’s activities and records to ensure that AREVA is meeting its commitments and that workers and the environment continue to be protected during the processing of high grade ore. This would include review of the training of new and returning workers, mill start-up and commissioning activities, and the results of comprehensive radiation and environmental monitoring programs.

Decision by the Commission

The public hearing will be webcast live via the CNSC website and available after the hearing for a period of 90 days. Following the hearing, the Commission will deliberate and announce its decision on the matter. The Commission’s decision and its reasons for decision are generally published within six weeks after the conclusion of the hearing.