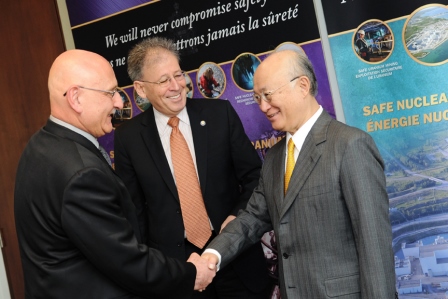 Canadian Nuclear Safety Commission (CNSC) President Michael Binder met with International Atomic Energy Agency (IAEA) Director General (DG) Mr. Yukiya Amano during his visit to Ottawa on March 29, 2016. As head of the Vienna-based intergovernmental organization responsible for the promotion of the safe, secure and peaceful use of nuclear technologies, DG Amano is a key international figure for the CNSC and its activities.

The IAEA Director General held meetings in Ottawa with Government of Canada officials ahead of the Nuclear Security Summit in Washington, D.C., from March 31 to April 1, 2016. In addition to the meeting at the CNSC, he took part in other discussions with senior Canadian government officials on IAEA matters.

During the meeting, President Binder and DG Amano discussed a wide range of topics including the status of nuclear safety post-Fukushima, the need for greater global accountability for nuclear safety, and the integral nature of peer reviews. They also discussed the importance of the upcoming 7th Review Meeting of the Convention on Nuclear Safety, to be held in early 2017 and chaired by CNSC Executive Vice-President Ramzi Jammal, who was also present for the meeting. They reviewed safeguards and security issues of mutual interest, and noted the successful International Physical Protection Advisory Service (IPPAS) mission to Canada last year. The IPPAS mission recognized the robust nuclear security framework in Canada which is primarily implemented by the CNSC. Other topics included areas for enhanced engagement, such as nuclear waste management. President Binder specifically thanked DG Amano for his video message at the end of last year marking the CNSC’s 15th anniversary and noted that the CNSC is celebrating 70 years of nuclear safety in Canada in 2016.